Dancer of the Boreal Valley Information

The Dancer's form is that of a huge female-looking humanoid with impossibly long, slender limbs. "She" has silver plated armor running up and down her body, with a veil trailing from her head. Her head and neck are concealed by this veil, which is held in place with a twisted and gnarled crown. Also hanging from the crown is a metal grille, which covers the Dancer's face. The Dancer's intro cutscene shows her emerging from a portal in a stained glass window, then dropping down and slowly rising, with a flaming sword in her hand, to face the player. The Dancer moves slowly and vaguely, as if swimming through the air, but she will strike at the player with immense speed and precision. At first, this boss wields a flaming, curved blade in her left hand which she uses rapidly as a swinging and thrusting weapon. When her health is around 50% depleted, she will summon another blade, this one imbued with ash. The Dancer will then attack the player wielding one blade in either hand, using both weapons in combo attacks; she is more dangerous in this phase as a result.

The first phase isn't too difficult, despite the Dancer's intimidating movements. Due to the large size of her flame sword it is not recommended to dodge backwards, but in such a way that allows you to reach and hit her back. Wield your weapon two-handed and watch her sword, trying to get yourself behind it. If you dodge one hit of a combo, the remainder of the combo is unlikely to strike you. Beside her right leg is generally safer than beside her left one, since she wields her sword in her left hand. Her most damaging attack in this phase is her grab; if her free right arm moves slowly then you must move some distance from her, quickly. Do not be greedy with your attacks; you are unlikely to get more than two in before she counterattacks. After half of her HP is depleted move away and be ready for the second phase.

In the second phase things become more complicated; she is armed on both sides of her body and gains a powerful spinning attack. Do not attempt to block the entirety of her spin attack as she will certainly stagger you; abuse pillars and try to dodge some of it. You must play more reactively in this phase, as safely approaching her has become more difficult and remaining close to her is out of the question. Wait for her to perform an attack with a long ending animation, then hit her and move away again (being very wary of the delayed action on some of her magic effects). You have time to strike her once during the jump & spin combo, between the landing AoE and the circular slash (dodge backwards at least once after the attack). Continue patiently getting hits in and avoid endangering yourself and you will win before long. You may also use projectile consumables to damage her more safely, although in phase 2 if you distance yourself from her she will jump and reposition herself, which will also involve an attack. 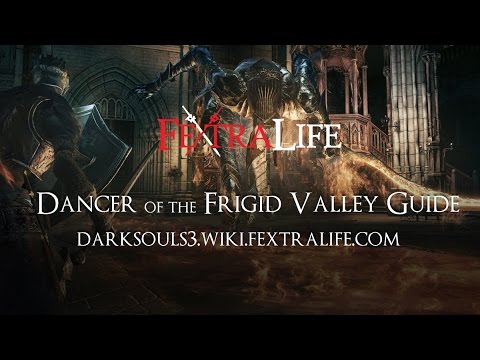